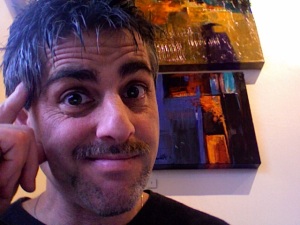 The Egg’s creator, producer and host is Matt Peiken, former staff arts writer at the St. Paul Pioneer Press and managing editor of the Walker Art Center’s magazine. Peiken spent 21 years on the staffs of daily newspapers before joining the Walker in 2007. On September 15, 2008, three weeks after leaving the Walker, he debuted 3-Minute Egg.

To date, 3-Minute Egg has produced and posted more than 330 short documentary videos about Twin Cities artists and arts happenings. This season, we’re cutting back our production to focus on grant-funded videos and work toward a major Egg evolution (more news to come on that) that we’ll unveil in Fall 2011.

3-Minute Egg is unique locally and nationally — serving artists and educating the public about the critical thinking, motives and work created by Twin Cities artists.

Our content is geared for the thousands of artists, hundreds of arts groups and legions of audiences and supporters who comprise the Twin Cities arts community. These are smart, passionate, engaged people largely dulled and dismissed by the arts coverage in local mainstream media. 3-Minute Egg covers the broad spectrum of the arts scene, from the major players to undiscovered and unheralded artists and art forms on the margins. More than merely previewing upcoming shows and exhibitions, 3-Minute Egg brings viewers into rehearsal rooms and recording studios, on stage and backstage, into gallery spaces and opening nights—illuminating the artistic processes as much as the final artistic product.

Each 3-Minute Egg mixes interviews with footage of the artwork into three to four minutes of high-definition video. We distribute our videos over a variety of platforms and outlets—the core 3-Minute Egg Web site (3minuteegg.org), our Facebook fan page, iTunes, YouTube and elsewhere.

In June 2009, 3-Minute Egg also became a weekly program on the Minnesota Channel of Twin Cities Public Television. 3-Minute Egg also partners with traditional media, currently delivering one video each week over the Web site of the Minneapolis Star-Tribune. Every 3-Minute Egg video is distributed under a Creative Commons license—not only is the content free to view, but open for anyone to embed on their own Web sites. This allows artists and arts groups profiled in a given piece to embed the video into their own Web sites. All our content is archived and easily searchable at 3minuteegg.org by artist name, artistic discipline, location and other elements.

3-Minute Egg stands on four legs of funding — grants, sponsors, donors and presenting partnerships with established media organizations. Please support this work by donating or, better yet, sponsoring an Egg. You and your business can have a presence in our online and/or televised Eggs for as little as $20. Even the smallest of arts organizations and independent artists can get in on the action. Attract awareness and customers in a way that isn’t possible with any other local media source. Go here to learn more.

3-Minute Egg is in the process of becoming a 501(c)(3) tax-exempt nonprofit organization. In the interim, 3-Minute Egg operates as a sole proprietor LLC and is privileged to have IFP-Minnesota as its nonprofit fiscal agent, allowing us to apply for foundation grants and accept tax-deductible donations. Please consider donating to 3-Minute Egg. You can see where every dollar goes each and every weekday — and even the smallest of donations helps keep the Egg cooking. Just click this link or click the DONATE button in the column on the right, which takes you to IFP-Minnesota, the Egg’s fiscal sponsor, where you can donate through PayPal.

In our Egg basket, you’ll find local arts and artists across the spectrum of disciplines:

Do you have an arts event or happening 3-Minute Egg should know about? Peiken focuses on Twin Cities artists and locally created work, with a soft spot for ambitious emerging artists beneath the radar of mainstream attention. Email press releases to NEWS(at)3MINUTEEGG.ORG.